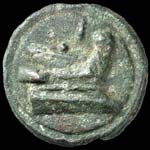 The initial phase of the Roman coinage

The first coins minted in Rome used for their images themes related to the Roman history and mythology, without any references to people in the government, like was common in the last part of the Republic and the whole Empire; for this reason, this first phase of the Roman coinage is named anonymous coinage.

The first coin issued by the Roman government was the as (or aes grave or aes librale), introduced with the development of the maritime commerce in 335 BC. The initial production of the as was through cast coinage and only at a second time using hammered coinage.

Due to the value of the coin depending by the quantity of metal it contained, the Roman monetary system was linked to their weight system, with a weight for the as initially equal to a Latin libra (273 g), then modified to a Roman libra (373 gs). 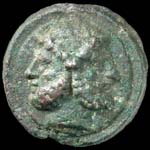 The as was divided in twelve uncia, with the 5 fractions named:

These coins were identified on the reverse with a mark to express their value with the letter "S" for the semis or with a number of "pellets" to point out their value in comparison to the uncia for the others coins. The multiples of the as were:

The images used for the as and its multiples and fractions were mainly linked to the Roman mythology with heads of divinity coined on the obverse and the value of the coin with images of the Roman civilization on the reverse. Among the series of aes grave, the most diffused was that of the "prow", based on the image used on the reverse; probably, this image remembered the naval victory by the Romans on the Latin league in Anzio in 338 BC. 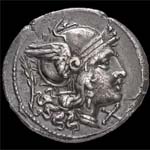 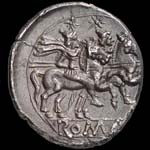 In 217 BC the denarius was revalued to 16 asses, due to the reduction of the value of the bronze coin. Even if the denarius continued to be the reference element of the Roman economy, since its adoption up to the end of its minting in mid III century AD, the silver percentage and the weight of the coin progressively declined. This devaluation was caused from a series of factors, like the lack of silver, the poor discipline in the government finances and the general strong inflation.

The usual image used on the obverse of the denarius was Rome, with the dioscuris on the reverse.

The production of gold coins in Rome was not common before the conquest of the Gallia by Giulio Cesare, with the consequent availability of the metal of its mines. 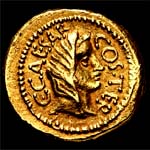 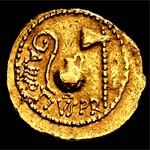 With Caesar, the phase of the anonymous coins or coinage linked to the family of the moneyers ended, to begin the minting of coins linked to the figure of head of the government in Rome.