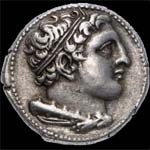 The Roman didrachm comes from the analogous coin of the monetary system in ancient Greece, based on the drachma. The name drachma (dracmh) is derived from the verb "to grab" (drassomai) and it supports the hypothesis that the economic value of this coin had to come from one "handful" (drax) of other objects, presumably oboloi.

Obelos, in turn, comes from obelos which means "iron spit" and it recalls to the usage of the metal in shape of rods in the commercial exchanges since the VIII to the V century BC, before the adoption of the coin. In the Greek coinage, the drachma in silver had a value equal to 6 oboloi.

Actually, the drachma doesn't represent an absolute values but it is the half of a stater (stathr), which is the real reference value. In fact, the term stater refers to the two dishes of the balance in equilibrium; also today  the "steelyard" it is a type of weighing scale. The stater, therefore, represents the general value of two drammes.

The stater represented the monetary unity for the gold coins, with a weight of around 8,7 g. For the coins of smaller value, instead, the silver was employed, with a relationship in value of 1:10 with the parity gold of weight; as base silver coin was used the drachma.

As a consequence of these relationships in weight, the parity of weight among the based system on the stater and that based on the drachma, therefore, is obtained between stater and didrachm, that is the multiple of the drachma with the double its weight.

But the Greek coin more used, since the V century BC up to Alexander the Great, was the tetradrachm with a value of four drachmas. On the obverse of this coin was represented the head of Atena and on the reverse an owl, the sacred animal to the goddess. Other multiples of the drachma were the mine (in Greek mna: mna), equal to 100 drachmas, and the talent (talanton), equal to 60 mines, talent that represents the maximum unity of weght in the Greek and oriental world.

As far as the coins of lower value, they were realized in copper, with a monetary unity given by the litra (litra), that became libra as unity of weight for the Romans, term used also for a scale.

The adoption in the Greek colonies in Sicily of the copper by weight for the commercial exchanges, forced to have a relationship among the silver coin of the Greek cities and the unity of value of the local populations. A libra in silver was adopted with a value of 1/5 of drachma, later replaced by a libra in bronze.

Other fraction of the obolo was the chalkus (from the Greek χαλκός, copper), that was a coin in copper of the Attica, with a value equal to the eighth part of the obolo.

A common characteristic of the Greek coins is the considerable depth of their images. The images concerned divinity, animals or local products of the places where they were coined. Given the large extension of the influence of ancient Greece and the elevated number of mints, an elevated number of different monetary denominations were produced.

The commercial relationship between Rome and Magna Graecia, used to utilize coins for their exchanges, pushed the Romans to adopt coins issued under the authority of Rome, as shown by their inscriptions, but coined in mints of Campania, according to the Greek weight system. 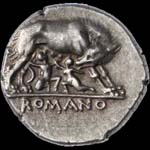 The initial series were two consecutive issues of a litra in bronze, with the head of Apollo on the obverse and a bull with a human face on the reverse; the inscription in the first series was the name Rome in Greek characters, and in the second series the word ROMAION in Latin characters.

Another silver coin was named by Plinius as quadrigatus, due to the image on the reverse of Jupiter on a quadriga driven by the Victoria, while on the obverse there was the head of Janus.

In addition to silver coins, an aureus gold coin was issued with the same Janus head on the obverse and a scene of oath (two warriors that swear on a piglet held by a third warrior) on the reverse.

Both the coins seem to refer to the victory brought by the Romans on the Sannitis and their coalition near Sentinum in 295 BC and to the consequent peace of 290 BC celebrated with the oath of fidelity.