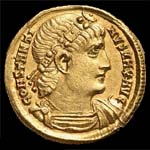 The solidus was the name of a gold coin minted by the ancient Romans. It was introduced with the monetary reform of Costantine I in 309/310 and used in the whole Byzantine Empire up to the X century. The coin replaced the aureus as principal gold coin of the Roman Empire. 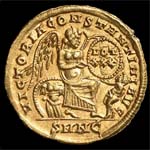 The coin was minted with a theoretical value of 1/72 of Roman pound (around 4,5 grams). The solidus was larger and thinner than the aureus. The weight and the percentage of gold of the solidus remained quite constant for the whole period of its production. There were produced also fractions of the solidus, like the semisse (half solidus) and tremisse (one third of solidus). 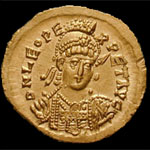 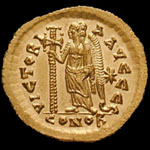 Impact on the world currencies

Variations of the solidus were used for different European currencies.

Before the decimalization in the United Kingdom took place in 1971, the abbreviation s., from solidus, was used for representing the shilling, that was worth a twentieth of pound sterling.

The Dinar was the base golden coin of the Arabic monetary system in medieval era. Its weight was of 4,25g of pure gold. Its name derives from the Latin denarius (aureus); coined in a similar way of the Byzantine solidus and broadly used in western Europe.