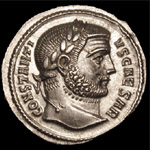 In numismatic, the Argenteus (from the Latin Argenteus) was a silver coin produced in the Roman empire since the monetary reform of Diocletian in 294 up to around 310 AD. It was similar to the denarius in weight and amount of silver at the time of Nerone. The coin was produced at a theoretical weight of a 1/96 of the Roman pound (i.e. around 3 grams), as shown by the Roman number XCVI on the reverse of the coin. 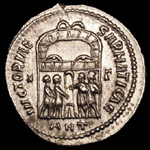 The word Argenteus, that means 'made of silver' in Latin, was used for the first time by Pliny the Elder in his Naturalis historia in the sentence "nummus argenteus" (silver coin). The fourth century historian Ammianus Marcellinus uses the same expression, but there is no  evidence that this is the official name for the coin. In the Historia August the same sentence is used to to refer to a several different coins.